My 2nd full day in the Mongolian capital was the start of my 2 week tour with the travel company Gadventures. I had met a few of my fellow travellers the previous night and had decided to join a women from California at an early morning Yoga class she had located at the nearby Shangri-La Hotel. It was such a unique experience taking a class that was entirely in Mongolian, of course I only knew the most basic of phrases, so myself and companion had to keep one eye on our instructor the whole time, but I think we made for an interesting spectacle for the regulars.

Feeling all zen, wearing our new Mongolian School of Yoga t-shirts, we arrived back to our hotel in time for breakfast. Although day 1 was free for us to explore, the majority of us who had arrived the previous day, had wandered around the main sights and museums in the centre of the city, so our tour guide, the inimitable Uggy arranged a bus and driver and took us to some of the slightly less accessible sights around the capital.

First up was the Winter Palace of Bogd Khan, no longer a working palace, it’s now a large museum complex, full of temples, art, and a whole array of Bogd Khan’s possessions from the time he was the ruler of Mongolia. It was a great introduction to the history of the country, learning about the religious art, temple etiquette and how many temples and monasteries got destroyed during the countries Communist years, this one survived due to the fact it had become a museum. Also, I have limited photos from the museum complex as many temples charge extra to take photos and I hadn’t quite worked out the exchange rate at this early stage in my trip and what seemed like an expensive extra, was probably only a couple of pounds now I look back on it. 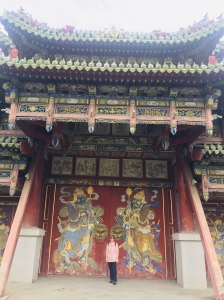 Next, we were driven to the Gandan Monastery, otherwise known by its Sunday name of the Temple of Boddhisattva Avalokiteshvara at Gandantegchinlen Monastery, phew! This monastery also managed to avoid being destroyed during Communist rule, and now has 150 monks in residence, making it one of the most important monasteries in the country. There is a lot to explore here, beautiful courtyard grounds, some stunning temples, the Dalai Lama has even stayed here, but the main attraction is Migjid Janraisig Süm, housed inside the largest building in the complex, its a stunning copper and gold statue, with its hollow interior stuffed with medicinal herbs, pretty incredible! 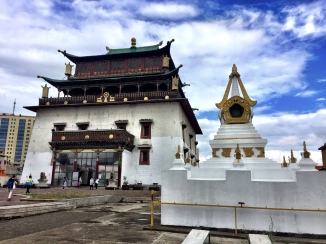 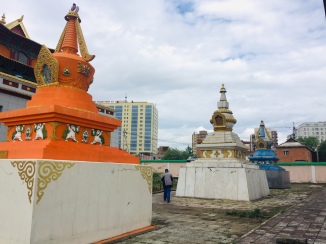 Our next stop wasn’t something I had read about before, located in the southern part of the capital, was Zaisan Hill. Once you have climbed the 100 steps to the top, you are greeted with a memorial remembering both the Mongolians and Russians who were killed during WW2, as well as a curved painting featuring scenes of the friendship between the two countries.  The painting was fascinating, its Soviet style a complete contrast from the previous art we had seen at the temples and monasteries and gave a real reminder of its communist history.

The views from the hill are incredible too, you get a sense of the layout of the city, how it’s growing and changing. Down below you can spot the Tuul River, new apartment blocks and shopping malls being developed, and it may be hard to notice at first, but once you do, the size is hard to take in, but behind the modern buildings is the infamous Ger District. More than half of UB’s residents still live in the traditional dwellings, with no access to water, sewage systems or central heating, it’s one of the reasons pollution is such an issue here. During the long cold winter months, the air is thick with smoke from the many fires lit to provide both heat for cooking and warmth, so much so that planes struggle to land, and a new airport is being built a lot further out of the city away from the smoky skyline. 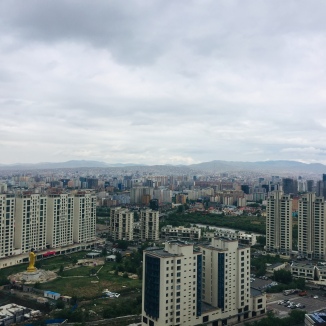 We then returned to our hotel, via a stop at a large bank with multiple ATM’s, so we could all stock up on currency. We had a few hours to kill, so a few of us got food and caffeine at Tom Tom’s coffee shop to fuel us up, before heading to a local cultural show for the evening. Featuring traditional dancers, contortionists and the whole reason for coming (for me at least anyway) was to hear the spine tingling, amazing throat singers!

After a good nights sleep, all our bags were packed between three 4×4’s and we met our designated drivers for the next 2 weeks. With a pit stop at a large supermarket to get last minute provisions such as coffee, chocolate and other sugary treats for the journey, we took a last glance at this wild, windy, chaotic capital city before we headed south to the Gobi, our adventure was just beginning to get started.