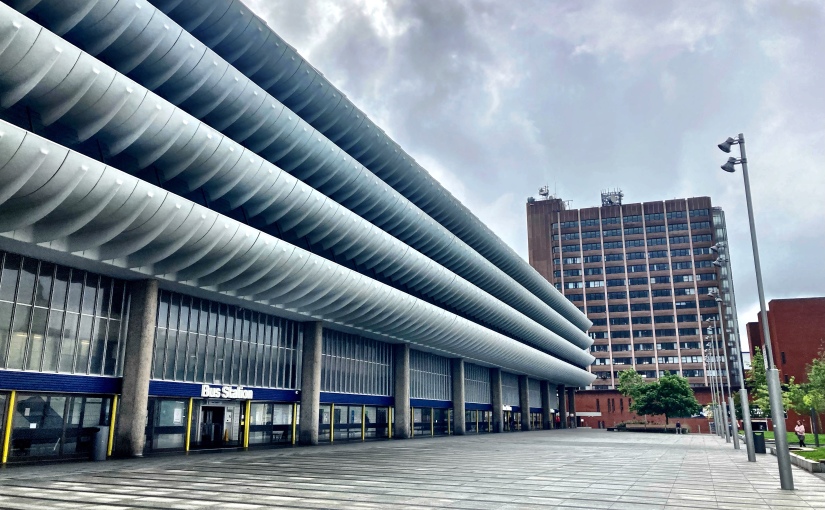 Another August weekend of wet and windy weather and cancelled plans, so I returned to my Brutal North book, and decided to head to my home town one wild Sunday morning.

There are 3 buildings featured in the book, one to the North of the city, in Fulwood and then the other two close to each other in the city centre, so I decided to visit all 3, add a few other buildings along the way and treat myself to a solo lunch, not bad for a potentially washed out weekend.

I started out at the ‘Fulwood Bubble’, built in 1973 it’s a plastic flat roofed building with 35 white panels creating the walls of the classroom, built onto a concrete base. Unusual for sure and easily visible from the main road, so it absolutely sticks out as some otherworldly classroom. I think I would have enjoyed taking some classes inside here, maybe it would have inspired me to work harder at maths . . . maybe not. 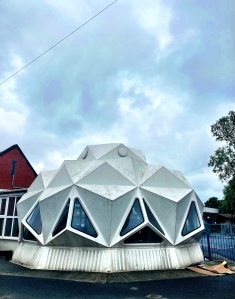 My second stop was to return to a place I spent many an early morning and late afternoon as a teenager, and is probably one of my favourite buildings in the world – Preston Bus Station. Build in 1968, it is often named in Brutalist Best of Lists for the UK, but I remember many people hated the long, grey concrete building and it was going to be torn down.  I always had affection though for its long curved edges, black Pirelli rubber floor & the cool retro signs inside. Luckily it was given Grade II listed building status in 2013 and so it continues to stand. 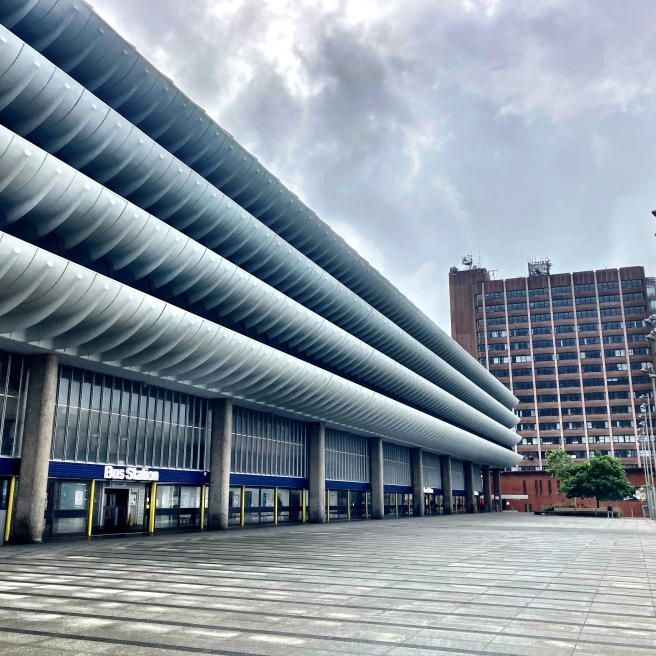 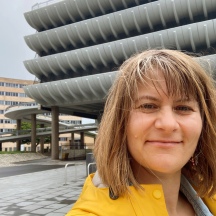 It had been a long whilst since I visited the place, even though I still drive past it every once in a while. So it was nice to fully immerse myself by driving up the spiral ramp and parking up inside, wandering through the car park, then heading down the tiled stairway and along the platforms before heading outside.  I would never have appreciated it as a school child, it was just the place where I got the bus to school & I didn’t even enjoy school, but I have always loved the bus station.

Just round the corner is Preston Guild Hall, and it is actually connected to the bus station by a ramp. Unfortunately the ramp and entrance to the hall were closed, whilst the place finds new management, so I walked around the outside and up the stairs to the front. I saw a few comedy gigs here in my early twenties and I am pretty sure my grandad went to some snooker matches here too, and even earlier than that, it had visits from The Jackson 5 and David Bowie, so it’s a shame to see its closed up like this. But it meant I had the place to myself to explore and take in the unusual angular structure and its long concrete cantilevers. Fingers crossed I hope they are able to find some future investment and bring it back to life soon, as its been here since the early 1970’s, and with a bit of care and attention it could return to its former glory.

Opposite the Guild Hall you get a completely different, but no less impressive set of buildings, Preston County Court & Sessions building and the Harris Museum. The Harris museum, which I haven’t visited in years (makes mental note to return) is a Grade 1 Neo Classical building, built in 1882 and is now home to a museum, art gallery and library. Whilst its neighbour the County Court/Session structure is Grade II listed and dates from 1904, but lets hope I never need to visit that particular building inside at all!

After I had successfully located all 3 Brutalist buildings in my book, it was time for wander down the high street, pick up a couple of presents for friends birthdays, and then I headed over to Preston Market. Its totally changed since I used to visit in the 80’s with my Grandma to buy fish paste and kippers for Grandad, I think it still needs some work, or maybe Sunday lunch isn’t the best time to visit. There were quite a few units that were closed, but I did find Brew + Bake who were happy to modify their avocado on sourdough to make it vegan, so thank you!

So with a full stomach and fully caffeinated, it was time to head back to the bus station for one last look, re-live those school day memories, collect my car and head home.

I am Emma Jane, a 40 something from the UK, with permanent wanderlust. This journal is tales of my past and present travel adventures. I hope to visit at least 100 countries around the globe, all the counties in the UK and all 50 US states. Welcome along. View all posts by welltravelledshoes1975