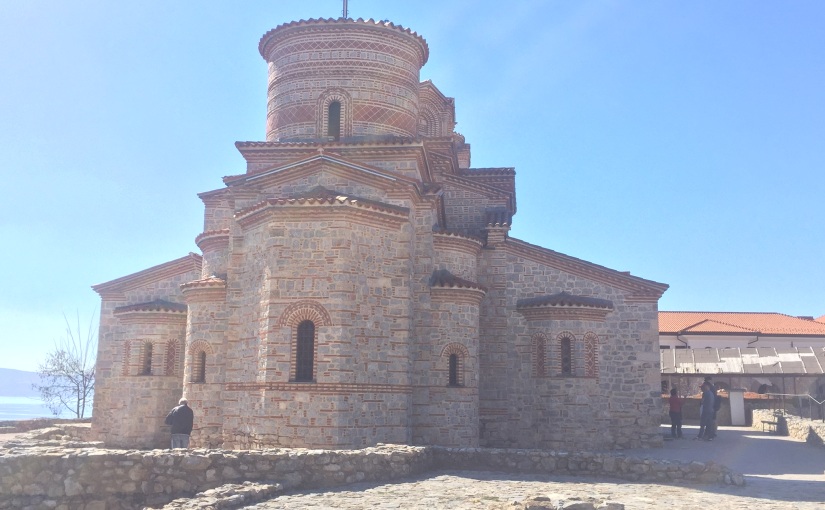 You know me, I love a UNESCO world heritage site and I often research which of the protected sites I fancy seeing when I’m planning a trip abroad, and build my trip around those. There is only one UNESCO in North Macedonia and it was over on the west side of the country on the border with Albania and as I’d seen buses and guides in Albania offer trips to this lake and town of Ohrid when I was there, I knew it must be worth a visit.

Buses leave Skopje main station every hour, starting at 7.30AM with a company called Galeb. and costs just over £10 return. With the journey taking close to 3 1/2hours, it may seem a lot for a day trip, but I knew the likelyhood of me returning to either N Macedonia or Albania any time soon was unlikely, so I knew this could be my only chance to visit, so with music and podcasts loaded on my phone and semi working headphones, I got on board the bus. 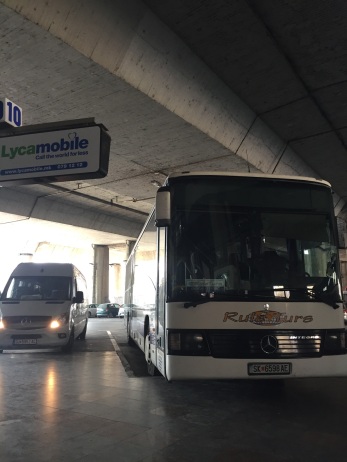 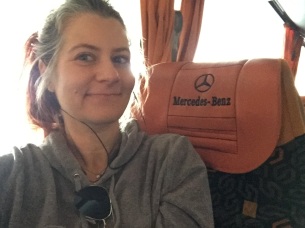 It was a pretty uneventful trip across the country with beautiful landscapes and snowcapped mountains in the distance and just as my limbs were starting to seize up, we pulled into the bus station at the town of Ohrid.

It was a short walk straight down to the lakeside, which also forms the border between N Macedonia and Albania, a fact that becomes all the more apparent when my phone suddenly sent me a text message welcoming me to Albania.

The lake itself is glorious, sparkling, clean and vast and has been a thriving lake and ecosystem for 2 – 3 millions years, with over 200 species of plants and animals unique to the lake. Many locals come here just to experience the beauty of the lake itself, and you would think that would be enough, but there is so much more here to discover among the tiny streets of the old town and on the walk up the side of the cliff along the coast, all of which comes under the protective banner of the world heritage site. 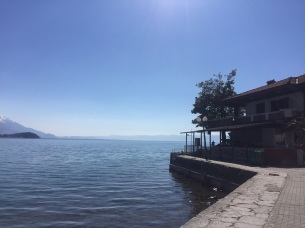 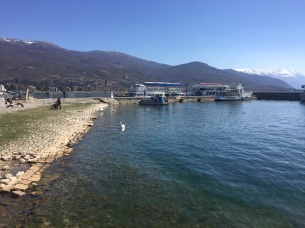 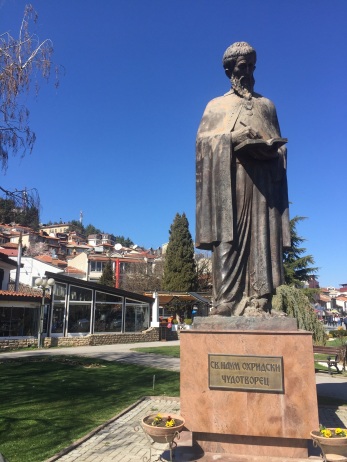 After taking in the views from the lake and enjoying the welcome relief of cool, fresh air, as opposed to the stale air con of the bus, I bypassed the lakeside cafes and restaurants and followed the signs towards the old town.

It turns out this ‘old town’ of Ohrid, is actually the site of one of the oldest settlements in Europe, with a number of archeological sites dotted around, and evidence spreading back as far as the Bronze Age.  The majority of buildings and relics of interest are mainly from around the 7th – 19th centuries, and it was from here that Slavic culture first spread across Europe, but with this being one of the last of the Slavic countries in the region I had left to visit, it was pretty cool to see all the heritage, history and culture at its starting point.

My plan was to expore the old town, then along the lakeside boardwalk, up the side of the cliff to visit the church and then continue onward and upward to the Church, Monastery and settlement. Luckily it wasn’t busy, the sun was out and the views were stunning.

The old town has lots of little streets with quaint small houses, shops and cobblestone streets, a really fascinating place, and you can really imagine what it must have been like all those centuries ago. One of the most interesting places I came across here was the Sveta Sofija Cathedral an 11th century church with incredible fresco’s and stone columns, making it a great place to get some shade. 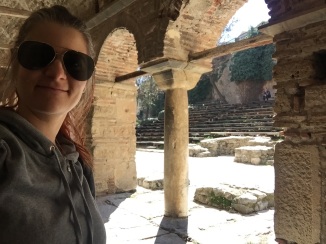 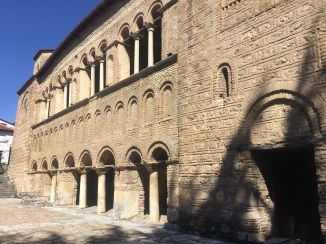 I then turned left and headed back towards the lake. Once I had located the boardwalk, I started gingerly at first, heading along the lake edge, and then upwards along the side of the cliff, ignoring the long drop to one side, and focused on the shimmering blue lake in the distance instead. 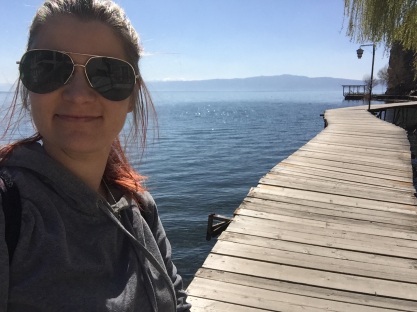 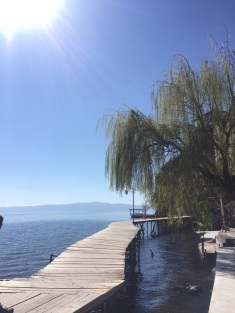 It’s absolutely worth it too, the stunning Saint John at Kaneo church awaits you, a church built possibly as early as the 13th century. Overlooking the lake, with its Armenian inspired roof, colourful fresco’s and incredible views, make sure you stop and rest a while here, conserving energy before heading higher up. 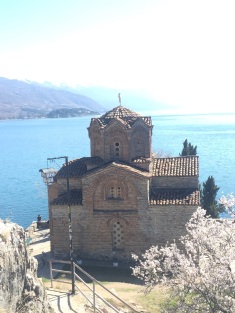 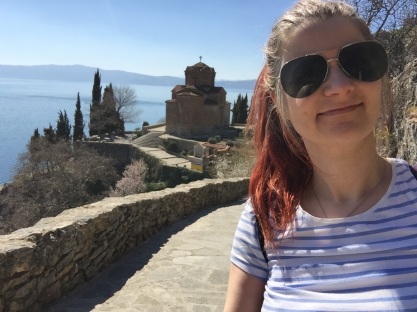 It was getting rather warm as I headed up through a woodland path that lead higher up the cliffside and was glad I had packed water and snacks. At the top I was greated by the most magnificant stone church and archeological site, known as the Plaosnik settlement and Saint Clement Church.

Originally the stone building started life as a Byzantine church, dedicated to St Clement of Ohrid, but when he arrived he thought it was too small, so he had another one built in its place and assigned it to Saint Panteleimon instead, charming! Once the Ottoman Turks arrived, they converted it into a Mosque, but later on allowed all old monasteries and churches to be restored, and so once again, it returned to being a church. By the end of the 16th century it was once again converted into a mosque, until the year 2000, when the whole area started to undergo massive excavations and it returned once again to being a church . .  for now. 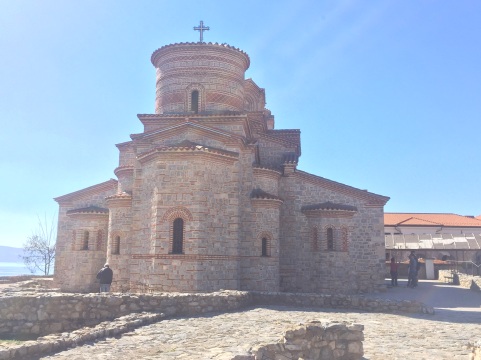 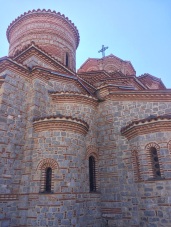 As well as the church itself, there is a large excavation area to explore, tombs, mosaic floors, and over 2000 Venetian coins have been found, showing evidence of a relationship between this lakeside town and the famous Italian city.

As I headed back down towards the old town, to my surprise, I came across an ancient theatre. A quick check in my guidebook put it at being built in 200BC and from the Hellenistic period, meaning between the time of the death of Alexander the Great and the beginning of the Roman Empire and I’m pleased to report its still in use today, hosting concerts, plays and dance performances. 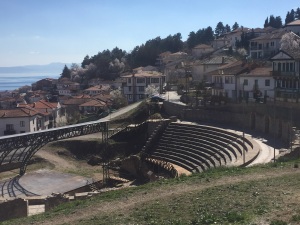 I also came across a sweet little church, which google later informed me was the Esglesia de Pando, its close by to the ancient theatre and well worth a visit. 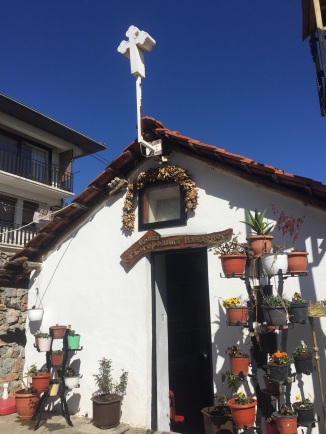 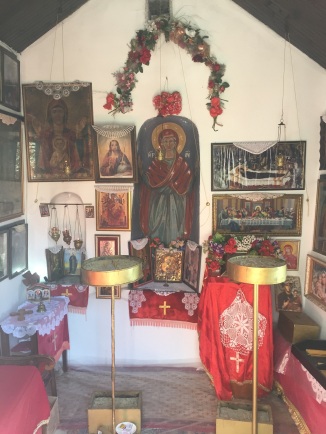 I finished my day in Ohrid with an early dinner back by the lakeside, sat out in the sun, tired from all the walking and the fresh air. As I walked back to the bus station, I made plans to take a nap on the long bus back to Skopje, feeling contented that I had made the trek across the country to visit this charming place.