The tallest mountain in Wales, and only second to Ben Nevis in being the highest summit in the whole of the UK. Its only a 2 hour drive from where I live in the North West, and its somewhere I’ve fancied doing for many years. Not because I’ve been a hiker or mountain explorer for years, but so many people I know have already hiked it and by people who I considered no fitter than myself, so I always had it on my bucket list to do.

Many times I’ve had offers or plans to hike it, but they always fell through, plus being an inexperienced hiker, I didnt want to do it solo or with someone even less experienced than me, so I always relied on someone else to organise it and so it never actually got organised.

Until 2020 happened, and a combination of all my foreign trips being cancelled, most things I could do socially had to be outside, (so hiking was No1 on my list) and the first hike I did with Bee Sober Manchester mentioned that Snowdon was planned for mid September. I quickly cleared my calender, booked a single, contact-free hotel room in Llanberis, the town inside the national park and got in training!

We decided we would start early on the Saturday morning, as all of us had arrived the night before, so it wasnt too painful to get up and get to the Pen y Pass carpark around 5.30AM so we could grab one of the limited car parking spaces (otherwise, you’re best to use the park and ride). The majority of the different paths all start from this carpark, so for £10 all day, its well worth it. Plus, there is wifi, handy if you’re co-ordinating a meet up with others, as phone service is sketchy and there’s toilets too.

We set off early to avoid the crowds, which have swamped to Snowdonia since lockdown, as well as to witness the sunrise on our way up, and boy was it worth it.

There are a number of different routes up to the summit and even a train, which I think you have to pre-book, but it wasn’t fully in service due to Covid. We hiked up the Pyg track, then came down on the Miners track, and its a route I would advise any first timers to do. It was completely managable for someone who hasnt done a whole lot of hiking in the last few years and the ascent only involved a bit of a scramble, with a lovely flat path down below on our way back. There’s lots of places to stop, (have a sneaky wee) rest, eat and take in those amazing views, absolutely worth the early start and we were back down by 12 and we looked back on the growing crowds with relief that we had avoided them with our early start. Also, by staying close by in Llaberris, I was having a hot shower and rest by 12.30. 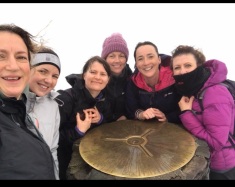 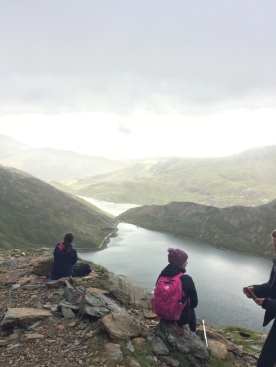