I’m just back from a trip to Philadelphia, but as it was over 10 years since my last visit to this historic, vibrant East coast city, I was excited to return and explore more parts of the city I never managed too last time. I was there attending a workshop, but made sure I put aside time to visit some sights aswell.

Arrivals. You can fly direct from London, Manchester or Dublin, which takes around 8hrs. If you go via Dublin you get to experience Pre Clearance before you board the plane, which as I mentioned in my previous post is a revelation! I didn’t fly direct to Philadelphia this time, I went from Manchester (via Dublin) to Newark in New Jersey. There are lots of options to get yourself straight to downtown Philadelphia from other East Coast destinations, so don’t be put off if flights are super expensive direct to Philly as they were for me. If you fly straight into Philadelphia and are not hiring a car (if you plan to stay solely in and around the city you wont need one) then get the inexpensive, handy SEPTA, straight from the airport to downtown, the most central stations  to get off at will be 30th, Suburban or Jefferson.

If flying in from Newark your best two options are; get the Air Train to Newark Airport Train Station, then either board the Amtrak straight to 30th Street Philadelphia which is direct but can be expensive, or get the NJ Transit train to Trenton, then change to the SEPTA straight to downtown Philadelphia. If you fly into New York, you can get the train or Bus from Penn Station, while Washington DC also has direct buses (taking around 4 hours) and trains from its gorgeous Union Station direct to downtown Philadelphia.

Getting Around. A lot of sights are easy to walk too, especially if you group a few of them in the same neighbourhood together during your visit, the SEPTA (buses, trolleys and subway) runs all over the city and is super easy to use, while taxi’s, Uber and Lyft are also available everywhere.

History Bit. The city was founded by an English entrepreneur and Quaker called William Penn in the late 1800’s after he was gifted some land from King Charles II. Prior to this, the area of land that eventually became the capital of Pennsylvania was inhabited by the indigenous people of the Lenape. There is so much history here in this city, whether you want to learn more about slavery, the declaration of independence or even its religious past, it is all richly reflected here in a lot of the popular sights visited today.

What to see. Independence National Park and of course the star of the park, probably the most famous broken bell in the world, is the Liberty Bell. There is a lot to see in this area, all the sights are located close to 5th and Independence Mall which is a SEPTA stop handily enough. There is the huge Independence Visitor’s Centre which is the perfect place to start your historic day trip, open from 8.30 daily and free, there is a shop, cafe, theatre as well as exhibitions which illustrate and inform all visitors on the importance this city has had on the rest of the country. Across the street is the Liberty Bell centre, which is also free and open from 9am, its first come first served, so time your visit well to avoid the queues. If its busy and you can’t face waiting for a B’elfie (Bell Selfie?) then walk towards the Independence Hall past the Liberty Bell centre and take a look back and to your right, you can see the Bell through the glass wall. Visiting the Independence Hall is also free, but you need to book onto one of the tours in advance, there are also free gardens and outdoor exhibits all around this area making it a must do whether you have a passing or keen interest in the history of the USA. 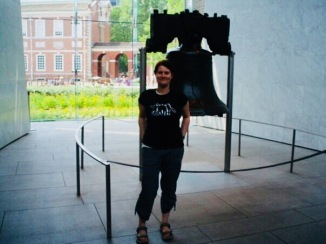 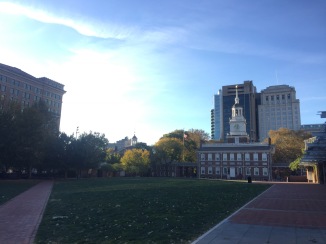 One block north of the Independence visitor centre is the National Constitution Centre this is open daily, costing just under $15 per adult for a ticket. This includes access to the Signers Hall, lots of museum exhibits, an interactive We The People show and a theatre production which runs every 30 minutes depicting the history of the signing of the constitution, fascinating stuff!

This area is part of the oldest neighbourhood of Philadelphia, so just wander around and you will constantly find places of interest and historical significance, the oldest street is here Elfreth’s Alley in fact it is known as the oldest residential street in the US. Christ Church Burial Grounds is located close by, where you can take a fascinating leafy green walk through the churchyard where Benjamin Franklin was buried amongst other figures important to US history. This church ground is situated on Arch St and Independence Mall, and if you continue East down Arch, close by is the Betsy Ross House which is where the first US flag was made by Betsy herself, see there is history around every corner. 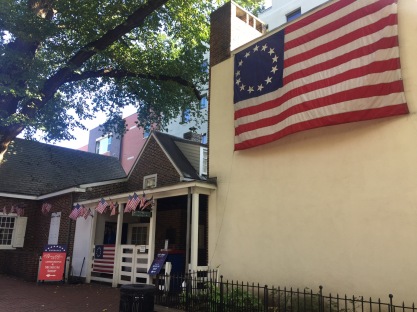 A short walk west along Arch St you pass the African American Museum, I couldn’t get to visit this time due to the workshop I was attending, but I definitely want to schedule in time to go next visit. Keep walking along this street and next up is the Chinatown Friendship Gate signally the start of Chinatown, like any Chinatown across the world there is a great colourful vibe, tonnes of shops, restaurants, cafes and a monthly Night Market. I headed away from Chinatown though this visit to Arch and 12th St and what may become my most favourite farmers market that I have ever visited, the loud, vibrant, assault on all the senses that is the Reading Terminal Market.

Over 100 years old and open from 8am-6pm daily, you must plan a visit to explore the 80+ stalls of food, drink and crafts. Definitely give the place a once over before deciding where you sit and eat and what to buy, there are Amish stalls serving home made cheeses, butchers and fishmongers selling their fresh produce as well as places to buy kitchen supplies and flowers as well as the many restaurants. Stay for something to eat for sure, whether its a vegan corn dog at Fox and Son, a Philly Cheesesteak at Carmens or comfort food at the Dutch Eating Place you can easily spend an hour here, I even spotted peanut butter chocolate bacon for sale, but gave that a miss!

The architecture in Philadelphia is amazing, with a range of styles both old and new, from the art deco railway stations of Suburban and 30th St to the 60 storey Comcast Tower (due for completion in 2018) and its even higher neighbour One Liberty Place, it can make for a dizzying but fascinating wander. If you head West from Reading Terminal Market towards the skyscrapers of downtown, dominating the skyline is the Masonic Temple. Taking 5 years to construct and then another 15 years to finish the interior, you cannot fail to miss this beautiful elaborate granite building, taking up a whole block of its own. Tours are available but limited and cost $15.

Right opposite the Masonic Temple is the largest municiple building in the US City Hall, its another huge impressive building, that proudly stands in the heart of the city and makes a good point of reference when exploring this part of town. Although it never became the tallest building in the world as it had been hoped, it did hold the record for tallest building in Philadelphia up until the 80’s. If you have a head for heights ascend up the tower for what I can imagine are insane panoramic views of the city, tower tours finish at around 4pm though, so dont leave it late, I couldnt fit it in this time with it being a work trip, so have pencilled it in for next time. 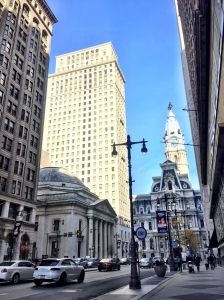 The next big attraction on most peoples itineraries when visiting Philadelphia will probably be the Museum of Art and even if you arent an art lover and dont want to pay the $20 entrance fee, still head over so you can run up the famous Rocky Steps and get a photo by the statue. You can get there by bus or on the metro to 30th St station and from there its a 20 min walk along the Schuylkill River, but if you fancy walking from downtown, head down the gorgeous tree and flag lined Benjamin Franklin Parkway. 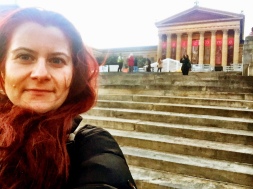 Even if you dont visit inside the art museum, head round to the back of the building and visit the sculpture and landscaped gardens with gorgeous views along the Schuylkill River, I only found them after a tip from my Lyft driver, who I gave 5 stars too of course!

There are so many more museums that are worthy of visiting, but as I was over for a work trip, I just couldnt squeeze as much in as I would have liked.  On my hit list for next time is the Franklin Institute, Rodin Museum, Please Touch Museum, The National Museum of American Jewish History and The Eastern State Penitentiary as well as the African American Museum that I mentioned earlier.

There is so much outdoor green space in Philadelphia, lots of parks, squares and river walks, which makes for a nice contrast when you have got your fill on museums and other indoor sights. Fairmont Park is the big one, with over 9,000 acres to explore, but there is also Franklin Sq, Love Park, Washington Square and the Schuylkill River Trail to name only a few. 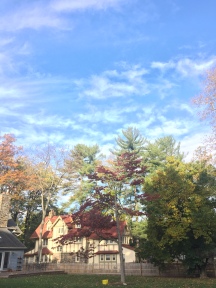 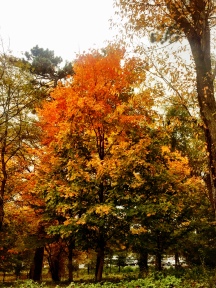 Food and Drink – Philadelpahia does great coffee, with some unique independent coffee shops that also side hustle as clothing shops, creative spaces and music venues. Some gems I visited during my latest stay included Rival Bros and United by Blue and next time I really want to visit Grindcore Coffee which is a vegan coffeeshop.

Speaking of vegan food, I visited Hip City Veg twice during my stay, its a 100% plant based diner that serves the most delicious meat-free food including chick’n fajitas and tempeh burgers that even the most hardened carnivore would love and the green drink below is the insanely amazing kale lemonade.

Always be polite – If you buy a $10 cheesesteak at Reading Terminal Market then a tip would be around $1.50.